The Atomic, Molecular and Optical Sciences Program at LBNL seeks to answer fundamental questions in atomic, molecular and chemical sciences that are central to the mission of the Department of Energy’s Office of Science. The program explores key chemical and physical processes using small to moderately complex molecular systems with an emphasis on ultrafast electronic and nuclear dynamical studies. This in-depth investigation of chemical processes relies on a close linkage between theory and experiment to provide the critical foundation for a better understanding of these processes in more complex environments.  A core strength of the AMOS program is the development of unique experimental and theoretical tools and methods as well as novel spectroscopic and imaging techniques.

We apply a broad span of established and emerging tools such as synchrotron radiation, free-electron lasers, optical lasers, laboratory-based extreme ultraviolet sources, and low-energy electron beams, in combination with the development of state-of-the-art experimental techniques and advanced theoretical methodologies, to enable studies across a broad range of time scales and types of systems. The current emphasis of the program is in three general areas with important connections and overlap: (1) inner-shell photo-ionization, multiple-ionization and dissociation dynamics of small molecules, (2) time-resolved studies of charge dynamics involving molecules in the gas phase, in clusters and at interfaces using a combination of attosecond to picosecond X-ray and laser pulses, and (3) low-energy electron impact excitation and dissociative electron attachment to molecules and molecular clusters. The theory component of the program focuses on the development of new computational and theoretical methods for describing from first-principles the complex multi-atom and multi-electron quantum states and processes that play key roles in these systems.

The AMOS Program is organized as three Subtasks:

Subtask 1: Photon- and Electron-driven Processes in Atoms and Small Molecules

Experiments on photon-driven processes in larger molecules, molecular clusters and pure and doped helium nanodroplets are carried out using HHG based time-resolved photoelectron and ion spectroscopy with state-of-the-art momentum and velocity map imaging (VMI). Strong-field induced dynamics in helium nanodroplets are studied using femtosecond time-resolved X-ray coherent diffractive imaging. Processes driven by low-energy electrons in larger molecules, molecular dimers and clusters are studied using momentum imaging techniques to develop an understanding of the fundamental processes of charge and energy transfer between metastable anions and other molecules in condensed phases. A predictive understanding of photoinduced electronic and chemical dynamics in heterogeneous, condensed phase assemblies from a molecular perspective is sought in the study of electronic dynamics of molecules in complex environments such as interfaces using time-resolved X-ray spectroscopy techniques.

Powerful new computational and theoretical capabilities for describing both electron-driven and photon-driven processes are being developed and applied to AMOS experimental work. To treat photoionization by synchrotron or laser pulses, a suite of unique capabilities for describing the electronic continuum using coupled channel electron-molecule and electron-molecular ion scattering methods is being developed and refined. These capabilities are used to guide and interpret photon-driven experiments carried out on small molecules and to provide key quantities necessary to extract the information contained in dissociative electron attachment experiments. Nearly all of the molecular dynamics studied in this program take place in molecular excited states. The ab initio electronic structure effort develops and applies scalable methods to treat electronic excited states in large molecules, excitation bands in disordered clusters, states where spin-frustration or other strong correlation effects are in play, and metastable resonance states.

The attosecond laboratory of Leone and Neumark has achieved the first successful noncollinear, attosecond four wave mixing measurements of electronic state dynamics using XUV light.  These signals are based on the sums and differences of one XUV photon together with two 800 nm photons and they obey angle-resolved phase matching. The method is allowing for the observation of novel state-resolved coherent dynamics of excited states of several atoms and molecules recently investigated.  The noncollinear geometry ensures that signals resulting from coupling between each pair of levels appears spatially at a new location, making the assignment and interpretation of electronic coherences uniquely free of obscuring transient absorption hyperbolic sidebands and Stark energy shifts. In the Figure, a noncollinear geometry implemented between the XUV and time delayed NIR beams exploits the phase-matching conditions inherent in the FWM process to generate a spatially isolated FWM signal. This isolated signal can be observed on the 2D array of camera pixels for the transmitted XUV spectrum after the arrival of a NIR pulse in argon (a). On-axis with the harmonics (along the blue arrow in (a)), features appear due to interference between the initial XUV pulse and the nonlinear response generated by coupling pathways with the same initial and final states (Stark shifting) while FWM signals attributable to ladder-type population transfer are found ~85 pixels above the harmonics at the 2p-4s/4s transition energies. Examination of these off-axis features as a function of delay between the XUV and NIR pulses reveals a complex oscillatory pattern corresponding to the wavepacket initiated by the XUV pulse in the manifold of states at 15 eV (b).

Figure. Attosecond FWM probes electronic wavepackets in argon. (a) Camera image of XUV spectrum after perturbation with NIR pulse intersecting the XUV pulse at an angle of 18 mrad. The phase matching diagram representing the generated four-wave mixing signal is superimposed on the image. (b) The delay dependent emission spectrum of the off-axis features indicated in (a), which reveals detection of the manifold of wavepacket states in Ar around 15 eV.

Anion fragment momentum imaging experiments are combined with ab initio calculations of the electron attachment probability in the molecular frame. This unique combination allows the calculated angular dependence in the electron attachment interaction and the measured 3-D momentum of the final state products to reveal the dynamics of the transient anion.

In a recent application of these efforts, in collaboration with Ann Orel and Cynthia Trevisan (Cal State Maritime), two Feshbach resonances and the dynamics leading to dissociation of the transient ammonia anion were investigated (see figure below). Previous studies by other groups had found that the anion fragment yield retained energy structures due to vibrational dynamics in the transient anion, in apparent disagreement with the fragment angular distributions that indicated axial recoil dynamics.

Figure:   Identification of a transient interfacial electronic configuration during the ultrafast charge injection from a photoexcited molecular dye into a nanocrystalline ZnO semiconductor substrate.

A set of HF determinants describing essential configurations are a superb basis for describing low-lying excited states in complex systems via NOCI. Far fewer determinants are required than an orthogonal basis CI of equivalent accuracy because the MOs are individually relaxed for each configuration in NOCI. We have reported an efficient NOCI implementation135, and applied it to challenging excited states including the low-lying dark 21Ag state of polyenes including β-carotene. 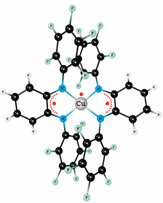 Figure 3-3. CuII(Fsbqdi)2 is treated in SF-NOCI as a spin flip from the ferromagnetic quartet state to access the entangled doublet manifold.